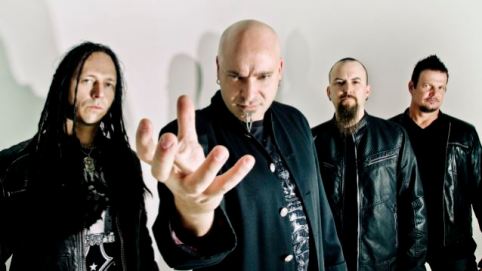 Last Friday I saw the band Disturbed play at a venue near me, and I won’t soon forget the experience. The concert was powerful, and it was emotional. I’ve never been to a rock concert where so many people cried, or were trying not to cry.

Disturbed is a heavy metal/nu metal band, and they’ve written songs that center around suicide. One of the videos to these songs depicts a woman who hangs herself. The video is graphic and it comes with a PSA from the lead singer, David Draiman, pleading with people who are thinking about taking their own lives to seek help and to know there is another way. The National Suicide Helpline is displayed in the video, just as it was displayed on the big screen during the concert.

Draiman spoke very eloquently and deeply to the audience. This is a man, and band, who create a deep connection with their fans. They refer to the crowd as their family, their blood.

In the middle of the set, the band moved from the main stage to a smaller stage in the center of the floor to be more intimate with the crowd. Draiman called for the house lights to come up and he asked for anyone who has dealt with substance addiction or depression, or knows someone who has, to raise their hands. With the lights on, I could see clearly throughout the venue, and more people than not had their hands raised.  Draiman then asked for everyone to look around and see that they aren’t alone.

This is when the band sang their inspiring songs about defeating one’s thoughts of suicide. The house lights stayed on, making the moment all the more sober. A mother and son sitting beside me embraced while they cried. Tears gushed from the woman’s eyes and down her face. Through cries they battled through the songs. A man beside the woman caressed her shoulders.

A few minutes later, she passed by me. I was sure the moment was too much for her. She needed a break. When she came back, I thought of giving her a quick hug, but I didn’t know her and she didn’t know me, and maybe that would have been unwanted by her.

While the songs played I looked around me. The woman and son weren’t the only ones crying. There were many tearful eyes about me. So many strong-looking men stood with their arms crossed over their chest and stoic expressions on their faces and tears in their eyes. It was all so much I almost cried myself but held it back. The pain being suffered around me was palpable.

Before the show, at the meet and greet, a fan had given the band a letter. The lead singer called this fan to the stage and asked for his permission to read the letter aloud. The shocked young man stepped onto the stage and nodded to Draiman his consent. The letter explain that this man had attempted four times to take his own life and was going to do it again until he heard the song “The Light” by Disturbed. The man stayed on stage as the band played the song marking one of the most powerful and emotional moments I’ve ever witnessed at a concert.

Disturbed, like other rock bands I’ve recently seen play, were very inclusive in their message. Draiman preached tolerance of all people, of all races and religions, and he even included gays and transsexuals, which I appreciated very much. Everyone around me cheered this message. I didn’t hear any jeers or sneers.

I went to bed that night feeling so empowered and appreciating my life.  If you ever get the chance to see this band play live, please do. It’s an experience like no other.

Below is a clip of the man Draiman called onto stage.

While the band played “A Reason to Fight” the mother and son beside me cried together.

A strong message of suicide preceded the song “Watch You Burn.”

*I don’t own the top picture of Disturbed.

2 thoughts on “Feeling a Bit Disturbed”