My dog, Phil, has arthritis, mostly in his right back leg. So when he started favoring that leg, I gave him an anti-inflammatory I keep on hand for such occasions. Within a couple days, the limp went away and I stopped giving the anti-inflammatories. But four days after the initial limp in his right leg, Phil started hobbling, while favoring his left hind leg. This was unusual. The left leg wasn’t the usual favored leg, and the limp was never that drastic. So I called the vet the next morning and got Phil in for an examination that day. The doctor felt a tear, but I would need to see a surgeon to confirm. In the meantime, Phil’s anti-inflammatory was upped in dosage. This was on a Friday. By Thursday of the following week, my dog was dying of liver failure.

I had an appointment with the surgeon on Wednesday (before I knew about his failing liver), and a few nights before this, Phil was throwing up and not eating. I chucked it up to the stress he must have been feeling related to his injured leg. But blood tests showed morbidly high levels of liver enzymes, and I wasn’t prepared for the call from the surgeon telling me she was extremely concerned about my dog.

Just a few weeks ago, he’d been a completely happy and healthy dog. For an eleven-year old, Phil had avoided major health issues until now. Other than the usual yearly check-ups, I’d only had to take Phil to the doctor for an innocuous eye infection and common stomach issues.  So it was crushing to accept that my dog was suddenly sick enough to die.

I spoke with my vet, and Phil was immediately given fluids that evening and put on seven different medications. His eyes and gums were heavily jaundiced, and it worried me. The hope was that we’d get enough fluids in his body to flush the liver. He was drinking on his own, but hardly eating, even with an appetite stimulant, but at least what he was eating, he was keeping down. Our go-to food was my mom’s homemade meatballs. Even with a failing liver, homemade Italian food was apparently hard to resist.

For the next few days, he went to the vet for IV fluids. After five days of almost no improvement, the doctor told me she wasn’t very hopeful, but if this was her dog, she’d give him a couple more days. A couple more days? Those words cut me deep. We were standing in the vet parking lot. The tears were hard to stop, though I don’t remember trying.

While Phil was at the vet getting fluids, I spent the time without him browsing through pictures on my phone, some taken at a park a mere two weeks before this happened. Those were emotional pictures to look at, because I knew the me in those pictures, with my dog, couldn’t fathom the reality that was in store in the short future.

I couldn’t stand being without him all day while he got his fluids, and I thought if my time with him was limited, I needed to be with him as much as I could. The vet agreed and she gave me fluids to put under his skin at home. You don’t go through a vein, you just stick a needle, attached to a long tube connected to a bag of fluids, in his skin. My brother did the honors of sticking him. I just couldn’t do it.

My brother loves that dog as much as I do. All you have to do is utter the word “Uncle” in front of Phil, and Phil’ll jump to his feet, tail speed-waggin’, in search of his favorite person.  It’s heart-warming knowing my dog is so well-loved by people other than myself. Aside from his “Uncle”, Phil has a “Grandma”, “Aunties”, and “Cousins” who were all concerned for him. I had so much support from my family, I never went to a vet appointment alone. My brother was with me for every one of them, as well as for the fluids done at home

Phil loves sitting outside in the grass, so we sat outside as much as he wanted. Because Phil was filled with so much fluids, he needed to go out three or four times during the night. At three o’clock in the morning one night, Phil wanted to lie underneath a tree, near the street in front of our house, his favorite spot. It was a still and cool late July night, and I sat beside him and watched him take the night in. Phil was always so content and happy being outside.

One Sunday afternoon, a few days later, we sat underneath that same tree, and I thought this would be our last Sunday afternoon together. I kept noting the time, so that the next Sunday, I could look at the clock and say “at this time last week, I was lying in the grass with my baby”. Or, “At this time, I was rubbing Phil’s stomach.” I wanted to be able to look back on that Sunday and remember how every moment was spent with him.  I was so conscious of my time with him. I suppose that’s what you do when you think you are living your last moments with a dog who is your everything.

The only other thing Phil loved more than sitting outside, was going to the park. My brother and I took him for a ride to his favorite place, and we took a lot of pictures. I hated thinking this was the end, but I wanted these days documented. I wanted to be able to look back at the possible last days of my dog’s life and know that despite everything he was going through, Phil was happy. I didn’t like thinking that way, but the vet’s words of hopelessness never left my mind, though it was hard to accept. 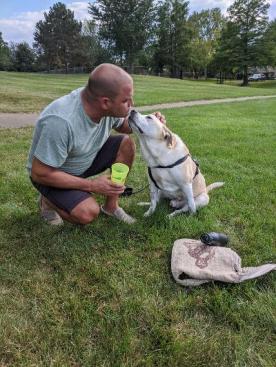 Still, after those “couple of days” the vet said she’d give her dog had passed, there was no doubt we were continuing with treatment. After a few more days of fluids and medication, we did another blood test, and though the levels were still high, they were lower than the previous test. And that was all the hope I needed. And when you’re pathetically desperate, as I was, all you can ask for is hope. Phil was still jaundiced, but we continued on.

About three weeks after getting the blood results that had showed his liver was failing, another blood test revealed all of his levels were back to normal. My dog survived liver failure. It is a major understatement to say that I am relieved and so appreciative to be allowed more time with my baby.

As Phil continues to age, I knew this wouldn’t be the last of his ailments, but I didn’t expect the next thing to happen so soon. The day after that last blood test, I noticed Phil’s right ear looked a little red. I thought it maybe have been an allergic reaction to something, so I left it be. But the next day it was even redder, so I called the vet. By the time I got an appointment, the infection was in both ears. A double ear infection seemed so innocuous compared to the liver failure he’d just survived, so I wasn’t very concerned. Phil was prescribed ear drops, but after three days of giving him those drops, my dog had completely lost his hearing.

I called the vet, and was told an ingredient in the drops, gentamicin, can cause hearing loss. The vet expected Phil’s hearing to come back after a couple days and periodic flushing, but it’s been five days now, and he still can’t hear his mommy’s voice.

In the last two months, Phil tore his ACL, survived liver failure, and is currently deaf. I wonder what is going through his mind. I know he’s confused, because he’s even needier towards me than he used to me. It’s as though he needs extra reassurance from his momma that he’s gonna be okay.

I haven’t given up hope that he will hear again, cuz what do you have if you haven’t got hope? If we got through liver failure together, we’ll get through this. Despite what happens, Phil will be okay because he’s loved so much, and I can only hope that he knows it. 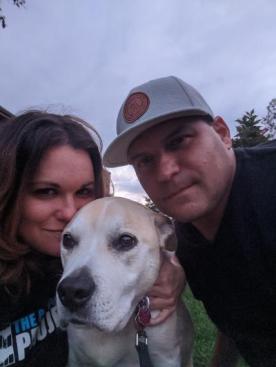 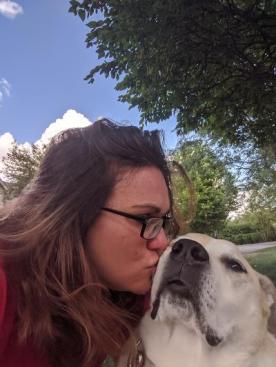