I got into an argument today with a stranger on Twitter about BSL – Breed Specific Legislation. BSL is legislation cities can pass directly targeting a specific breed of dog. Some ordinances completely ban a breed from an entire city (Denver and Miami has done this).

If found as strays, or rescued from abusive and neglectful situations, these dogs will be categorized as “pit bulls” and with it, in some situations, a death sentence will be imposed upon them because not many people, it seems, are willing to bring home a dog labelled “pit bull.” Most of these dogs will never leave the shelter they are dropped off at alive.

BSL is another obstacle these already abused and misunderstood dogs have to endure when trying to find a home. At the local shelter I volunteer at  there was a pit/lab mix named Sable. She was a loving dog who wanted nothing more than to have her belly rubbed and to play with a hose. A family wanted to take her home, but found out their home association didn’t allow pit bulls. Sable would have to wait nine more months before she would finally leave the shelter.

I remember wanting to yell, “Because she’s a fucking pit bull! And people are afraid of pit bulls no matter how sweet they are!”

Of course, I didn’t yell that. I didn’t say anything. I walked away, pissed that there is yet one more obstacle these poor dogs have to fight to find a home. Sable was forced to spend her days in a kennel instead of a home because of BSL. And that isn’t fair or right.

I was arguing with this person on Twitter that BSL kills pit bulls because it makes it harder for them to find homes. When pit bulls don’t find homes, they die. My shelter is a no kill-shelter, but if it wasn’t, Sable would have been put-down. Killed. And she deserved to live. They all do. Thankfully, Sable did find a home, but most are not so lucky.

To me, BSL is straight-up discrimination. We are blaming not just one breed of dog for the aggressive actions of a few dogs, who were made to be mean, but five breeds. How can that be right? I’m always leery of media reports of pit bull attacks because how do they know for sure it was a pit bull? Since “pit bull” is already categorized to include five breeds, throw in mixes, and it’s nearly impossible to know for sure the exact breed of dog.

The probability is that the media doesn’t know for sure the dog is a pit bull. But that doesn’t stop the headlines that target pit bulls, because those headlines sell newspapers. Those headlines get people’s attention more than “Some Type of Mix Dog Attacks Man on Train!”

I think pet owners should be held accountable for what their animals do. A dog doesn’t just maul a person out of the blue. There are signs of aggression before that happens, and I’d bet everything I have that it was the owners who made those dogs that way.

I adopted a pit bull mix. I didn’t have to train him to be the sweetheart that he is. He came to me that way. Dogs labelled “pit bulls” are not born mean. They are loving dogs who deserve to live. They deserve homes.

If the town you live in is considering BSL or currently has BSL, please do all you can to stop or end it.  It is wrong. And it kills. These dogs need more people to advocate for them. They don’t need any more adversaries. They already have enough of those.  If you can, adopt a pit. Give a “pit bull” a chance. I can say from experience that you won’t be sorry. 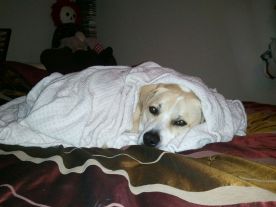 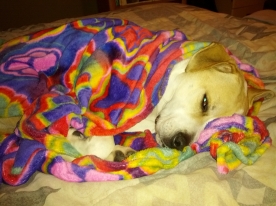 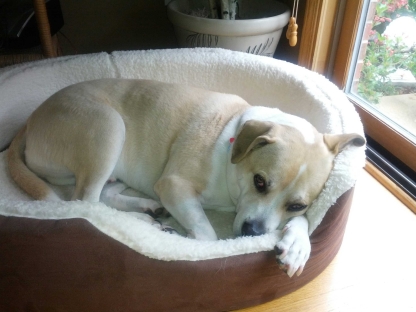 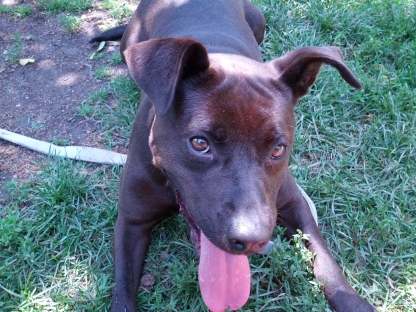 Sable, the chocolate lab/pit mix and my baby, Phil. Two “pit bulls” who found loving homes. I wish they all do.

13 thoughts on “Don’t Bully My Breed”