I spent a couple hours today at the the animal shelter I volunteer at. The unusually warm weather we’re experiencing for this time of year affords me extra time to take the doggies out into the yards.

We don’t have any huskies with us right now, so while this awesome weather is around I intend to take advantage of it and get my furry friends outside as much as I can.

But I was a little more adamant today, than other days, about setting aside time for the shelter. Last Friday, my shelter took in fifteen dogs from animal control in Oklahoma because they were overflowing with dogs, as many animal controls unfortunately are. All of these dogs were on their last day, scheduled to be euthanized.

While I was in the yard with one of the rescued dogs, Heather, a brown lab mix, I thought about all the poor babies that never make it out of the horrible places their trapped in. Being in rescue you hear a lot of stories, and their all terrible, but the horror of it all is more real, palpable, when you can hold a dog and understand why it is shaking, or look in a dog’s eyes and are aware why they’re petrified; because you know their story.

Heather is a young, very scared dog because she was taken from a property that had over two hundred dogs and one large trough. The big, stronger dogs got all they wanted, leaving the weaker, smaller dogs to fight over scraps.

Heather was shy and unsure when I took her out of her kennel, and she didn’t want to follow me right away. But when I gave her the time she needed and showed that I wasn’t going to force her, that she was in control, she slowly made her way toward me.

Once we were in the yard, I let go of the leash and let her roam and smell wherever her nose led her. I sat down in the gravel, hoping she’d trust me enough to come near me. I saw her look my way a couple times as she explored the area along the fence. She was definitely curious about me.

I left her alone, until, finally, curiosity got the best of her and she came over to me. I petted her gently on her back and sides, and that was all it took. Like most neglected dogs, Heather deeply craved attention and affection. She wasn’t interested in the toys in the yard or the treats in my pockets, all she wanted was love.

Heather is going to be a super-loving dog for a very lucky person someday. That is, if that person is willing to give a shelter dog a chance. Shelter dogs aren’t broken. From what I’ve seen, they have survived some of the most cruel and gruesome living conditions I’d never want to imagine.

That doesn’t sound very broken to me, in fact, it sounds pretty damn strong and resilient.

I’m so glad Heather was able to escape what fate, it seemed, had in store for her. I wish every dog did.

My shelter is a no-kill shelter. That fact means I don’t have to experience a very real side to rescue; killing dogs (oh, the irony in that). I feel for the people who have to administer that fatal, life-stealing shot to a completely healthy dog knowing the only reason the animal is seconds away from death is because someone couldn’t (or wouldn’t) take the poor baby in as their loving pet.

According to OxfordPets.com , 3 to 4 million cats and dogs are euthanized by U.S shelters every year, yet only 18% of owned dogs were adopted from an animal shelter.

What the heck is wrong with people? Why, when so many wonderful animals are being killed every day, year after year, would anyone buy a dog from a pet store, online, or even a breeder.

Whenever I see “Puppies for Sale” signs, I take them down. If I’m driving, I pull over and yank them out of wherever their hanging while cursing under my breath how people should get real jobs instead of contributing to the animal overpopulation by charging thousands of dollars for puppies.

Pet stores only take back the dogs they sell for a limited time, no refunds after a couple weeks. Shelters will take back one of their dogs any time in the dog’s lifetime. Because of this, we do get animals dropped off at our shelter that were bought from pet stores. Some of these dogs are sick because most pet stores get their puppies from puppy mills, which are inhumane and the mother pups receive zero veterinary care.

As if pet stores, puppy mills, and breeders weren’t enough, recently, I was told about a new craze called “Puppy Parties.”

Apparently, a group of people can rent puppies and gush over them like idiots for an hour or two. Scratch their ears, kiss their noses, and hold them like a baby.

My first thought when hearing about this was,”What happens when these cute little puppies aren’t cute little puppies anymore?” Puppies grow fast. To stay in business, there must be a high-turnaround rate. Which means, now dogs are being bred to produce puppies to keep adults amused.

How pathetic and how sad. When these puppies are grown, they will most likely end up in an already over-crowded shelter, maybe even a high kill-shelter.

So, if you ever attend one of these despicable parties, and you give a puppy a kiss, please ask yourself who will be kissing that puppy in a year, if that puppy will even still be alive.

Puppies are not here for your entertainment.

Strippers are here for your entertainment.

*Note: If my writing about puppy parties made anyone reading this want to throw a puppy party, despite knowing that the puppies’ futures are precarious, (at best); you’re kind of a jerk. I hope the puppies poop all over your carpet, couch, and a couple of laps, too.

Below are four of the fifteen dogs that were about to be put-down. They are in a good place now. Waiting for their forever homes. Heather is the brown lab mix with the big ears. 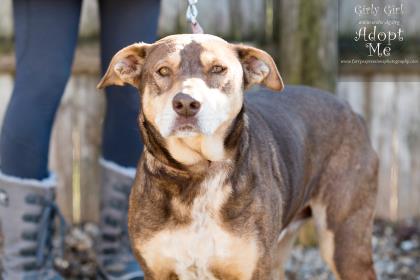