Hug your dog. He/She deserves it. They give so much, but ask for so little.

No matter how sad, frustrated, or upset I may be, when I walk into a room and see my dog, Phil, stretched out on his back, legs bent across his chest, his front paws relaxed over his face while flashing me an upside-down smile, I can’t help but laugh because he looks so silly. And we need a little silly in life to make us smile.

I’ve realized that in many ways I need to be more like him.

Phil’s a great listener. He never leaves me, even as I drench his fur with tears, he stays right by my side, and listens to my sad tales no matter how many times he’s heard it. I need to be a better listener. No more interruptions. I will listen to your side of the story, from start to finish, even as you tell it for the six-hundredth time.

He’s patient and patience is a virtue that often eludes me, especially since I started sharing my home with children. But no matter how comfortable Phil may be curled up in his favorite spot on the couch, once those kids barrel loudly into the room and trample on the cushions he was peacefully sleeping on, he jumps off.  He doesn’t bark. He doesn’t growl. He doesn’t bite. He simply leaves the room without appearing too upset about it. Maybe it’s because he knows  he’ll find some other quiet place in the house and be grateful for it, even if it’s on the floor.

The kids have tested my patience like this before, when I’m quietly reading a book or practicing yoga, only I don’t usually handle it nearly as eloquently as my dog. I argue that I was there first. I stubbornly fight for my spot and when I do finally admit defeat, I leave the room in a huff, hardly ever grateful that there’s another quiet space somewhere in my home waiting for me.

I rescued Phil from a shelter and although he’s a pitbull, there were no signs that he was involved in dog-fighting, but there were major signs of neglect. He was found as a stray roaming the streets of Chicago. He was an abandoned dog, without a home, but he was also a survivor.

Painfully, I force myself to imagine him cold and hungry, lost and alone, wandering around with no place to go. I think about all the people who saw him but did nothing. I get upset, but then I imagine those who fed him scraps of food or offered water to get him by. It wasn’t much because when I brought him home, he was all ribs, but it was enough to give me a chance to find him. I’m so grateful that I did.

He also knows how to love.

He loves with all he has, without holding back. When I open my arms, he comes to me without hesitation, undeterred by the risk of being turned away. My baby lays it all on the line and I don’t plan on letting him down…ever.

My dog gives me hope. He lights up my darkest days because I know he has suffered to end up here, in a pretty good place, with a mommy that loves him so much. He survived his battles and won. I will too, and so will you.

A picture hangs in my room with the saying “A Dog Loves At All Times.” 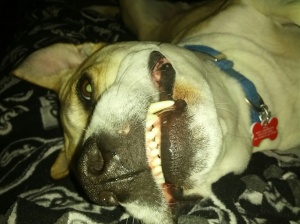