Thankfully, Romney didn’t win Pennsylvania. But it is clear that a certain political party (Republican) is dead set on passing laws, ostensibly to stop voter fraud, but the law’s real objective is to prevent a specific demographic (poor minorities) from exercising their Constitutional right to vote, as was clearly stated by Turzai. And why? Because statistically poor minorities tend to vote Democratic.

The Republican party, without contrition, is attempting to rig the election in their favor by oppressing the votes of tax-paying, law-abiding citizens.

When I recently voted in my State’s primary, I didn’t need to show any ID. I gave my name and was given a form with a copy of my signature on the bottom that had been signed by me when I registered to vote. I was then told to sign my name to match the signature already on the page. The process took less than thirty seconds. My signature matched completely. There was no doubt I was the person stated on that piece of paper.

The idea that it is easy to  duplicate someone else’s John Hancock baffles me. I have two nephews whose dream it is to play in the Major League. They’ve been scribbling their signatures for years all over my notebooks and notepads, practicing their autograph for when they are famous ball players. I recently attempted to copy their signatures and sign their name perfectly to match their own. I couldn’t do it. I didn’t even come close, even though they were signatures that I’ve become very familiar with through the years.

The right for disabled people, including our veterans and elderly, without an ID should not be taken away.

If it is agreed that these circumstances should not be crimes, then let’s not treat this demographic as criminals, and take away their right to vote.  If there were any verity behind the claims of voter fraud, I may reconsider my stance. But because we know the over-zealous cries from Republican lawmakers about the veracity of election fraud is mendacious, I stand by my opinion that no state should force their constituents to present ID’s  when casting their vote, a Constitutional right.

According to voterfraudfacts.com, between 2000 and 2010 there were “649 million votes cast in general election, 47,000 UFO sightings, 441 Americans killed by lightening, [and] 13 credible cases of in-person voter impersonation.”

Thirteen credible cases of in-person voter fraud. Thirteen! In ten years! And Republicans are so scared, acting like drama queens, over 13 possible voter fraud cases in ten years that they are willing to prevent hundreds of thousand Americans from exercising their Constitutional right?

Oh wait…that’s right…It’s not about the 13 cases of fraud. Even if there were 13,000 cases of fraud, their objective wouldn’t be about those either. The Republican party’s ambition – intention- is to institute voter ID laws to disenfranchise a demographic of people, who generally don’t vote for them, from casting a vote because they know their party can’t win without cheating.

God Bless America. Cuz we’re gonna need many blessings if the Republicans get in the White House.

* Another interesting statistic: Between 2002 and 2005, 197 million votes were cast for federal candidates, and 26 cases (both in-person and absentee ballot) were convicted of voter fraud. That comes to .00000013 percent of the vote.

Please get out there and vote, and help those who may need assistance in getting to the polls.

A Facebook friend recently posted that she doesn’t have health insurance through her job, and had to pay a couple hundred dollars for medication. She can’t afford individual insurance, so one person suggested she may qualify for Medicaid. She agreed she would no doubt qualify, but would never go on Medicaid, or accept any kind of public aid.

I, along with quite a few others, commented that this was ridiculous. Programs like Medicaid were set up to protect people who can’t afford their own insurance, or, for people employed at jobs that either don’t offer benefits, or the person doesn’t meet company insurance eligibility requirements.

Whatever the scenario, if you don’t have insurance, and you qualify for Medicaid, i think you would be foolish not to take it. To walk around this country without health insurance, knowing how exuberant medical costs are, is just plain reckless. A trip to the doctor’s office alone can cost hundreds of dollars. Not to mention a freak accident that sends a person to the hospital, now we’re talking thousands of dollars. Easy.

So why would a person risk that? Is being on Medicaid shameful enough that a person would rather go without any type of coverage, and just take a deep breath and wish for the best?

I blame a certain political party out there who love to bash people who need government assistance as “takers.” That somehow, they are always to blame for not being self-sufficient, regardless if said person had been working what they thought was a steady job, until that job was abruptly moved overseas, as so many of American jobs have gone.

People who are reluctant to apply for help, when they desperately need it, don’t want to be the kind of people some politicians put down publicly. The freeloaders. The irresponsible ones who need others to take care of them. The ones driving this country down.

I believe everyone, at some point in their life, will need help. Maybe it won’t always be financial, maybe emotional, but regardless, help will be needed because it’s tough to get through life on our own, alone.

It seems it’s more acceptable for certain people to take advantage of the system, than it may be for others. I was reminded of this as I watched the third Republican debate a couple weeks ago when the front-runner Republican candidate, Donald Trump, stated, in an unapologetic tone, (i’m paraphrasing) that in filing for four business bankruptcies he was merely taking advantage of the laws of the land.

This is true. Donald Trump did what corporate bankruptcy laws allowed him to do. When his companies racked up too much debt, he filed for bankruptcy. In 2004, according to CNN Money, Trump’s Hotel and Casino Resorts went through the bankruptcy court and shed over 500 million dollars in debt. Just like that. 500 million. Gone.

Although he lost majority control of the company, Mr. Trump was still able to retain control of his casinos.

This made me think of a scene from Goodfellas where mobsters assumed business interest over a bar, and the first thing they did was rack up the credit card bill. Then they took all that booze bought on credit and sold it out the back door for 100% profit. Then, once the credit ran dry, they torched the place. Never paying one penny back to the creditors.

This is what I think of when I listen to Trump talk about the “successful” bankruptcies that saved his businesses. How many companies didn’t did he pay when 500 million dollars was wiped out? It was a fresh start for Trump’s businesses, but what about the businesses he owed money to? The ones that never got paid.

If Trump can speak so blatantly about taking advantage of the laws that he could benefit from, then why are average people so ashamed of doing the same thing? Why does a person of modest means feel disgraced if they use the system to help them when they need it?

But not Trump. Trump is leading his party in a run for the presidency. The highest office in the country, and, probably, the most powerful position in the world.

I worry about the prospect of a business man as a president. The notion that a country should be run as a business frightens me. But I’ll tackle that in another blog.

For now, I leave you with this, take the help that’s available for you when you need it. If Donald Trump isn’t embarrassed by all that he’s taken so far, then you shouldn’t be either. 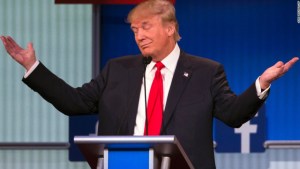 I don’t own this picture. I believe it is public domain, but if not, I will take it down.