If you follow my blog at all, you probably already know this. It wasn’t my intention to use so much space penning about my favorite animal, but these things happen. I write about what I love.

Ever since adopting my Lab/Pit mix, Phil, five years ago, I’ve gotten more involved with animals than I ever had before, or ever imagined myself to be. I volunteer at an animal shelter, spending as much extra time with the dogs, outside of my regular shift, as I can.

I protest regularly with an organization against pet stores selling puppies that come from puppy mills, which are most, if not all, pet stores. With this group, I have also sat in on town meetings to support a ban against the sale of puppy-mill puppies, and I’ve emailed numerous politicians pleading for such a ban.

I’ve taken my stance. I’ve lent my voice to a cause I believe in. Whether it be through emails, signs in my hands, or by my mere presence, my voice has been spoken, but whether it’s been heard? I don’t know.

But I won’t stop.

I don’t state this to show how wonderful I am. I’m not wonderful. Trust me. I’m a terrifically-flawed person. A Deeply, terrifically-flawed person. I write this because I don’t know where all this fight came from. I didn’t grow up in a household of activists. Neither of my parents had staunch political beliefs. We just lived our lives in a quiet suburb, where the word “protest” was never uttered.

But then, decades later, I adopted a pit-bull mix, and everything changed.

Even though having a pet isn’t new to me, this time around it was different. Growing up we had a cherished family dog, a Lhaso Apso/Maltese mix named Coco, for over fifteen years. But I was a child when we got him, and barely a young adult when he died. None of the years between that time did I ever think about animal abuse. I had naively assumed that all dogs were as loved and doted on as Coco was. Maybe I was too young, or too capably self-absorbed to look beyond the walls built around my cozy little life to see the world.

But I’m looking now, and I see the kinds of abuse animals suffer. Phil’s breed is the most abused and neglected breed of all dogs. The moment I fell in love with my pit-bull mix, I knew I had to fight for him. But I can’t only fight for pit-bulls. I need to fight for all the animals suffering because of human greed. Whether it be dogs living their miserable lives in dirty, over-crowded puppy mills, or pigs crammed into gestation crates so small they can’t even turn around, or mother cows bellowing for their babies, taken from them seconds after birth, to either be killed for meat, or raised to suffer as a dairy cow.

I need to fight for all animals being abused..

Last week, I participated in my first protest with Mercy for Animals. It was a protest against the way farm animals are forced to suffer.

This isn’t me being wonderful. This me finally doing something. And it’s about time I did. 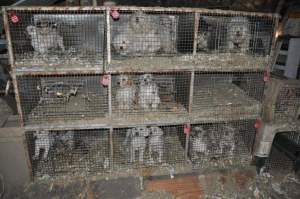 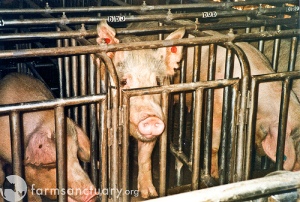 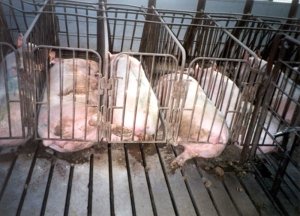 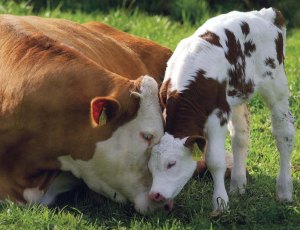 *I don’t own these pictures. I will take them down if they are copyrighted.