When I was a young girl my grandmother would tell me stories about the “good-old days,” while showing me worn-out, black and white pictures of family members long-passed before I was born, or of those I knew, but with unfamiliar faces, fifty or sixty years younger than the faces I recognized. I was at the age where I thought old people were always old. So it was hard for me to imagine a time long ago when my elderly uncles hung from trees wearing sailor hats, or my aunts who walked with canes, swing-dancing in the middle of a crowded ballroom – even though it was right there in the pictures.

I looked through the old, torn-at-the-edges pictures believing my grandmother as she spoke fondly of a past where people lived “simple lives, spent time together, and didn’t do bad things to each other.” I believed in the superiority of the “black and white picture” era, and that the people and the times then were so much better than they were in 1985, until I learned better.

The “good-old days” weren’t good for everyone. And people did do bad things to each other. They stole. They cheated. They scammed. They murdered. They were opportunistic when they should have been empathetic and moral. In the last century alone, some of the most horrific acts against man occurred, yet somehow those years are still considered “the good old days.”

I don’t have the space in this blog to detail these atrocities, but pick up a history book. It’s all there. The past was just as unscrupulous as the present. I was reminded of this fact on July, 24 2015 while reading an article in the Chicago Sun-Times about a tragedy that had occurred on that date one hundred years ago.

On July 24, 1915 a passenger ship called the Eastland capsized in the Chicago River in downtown Chicago, within two dozen feet of shore. Crowds of people, possibly loved ones of the passengers, who had watched the vessel leave its dock, threw ropes and chairs, whatever they could find, into the water. There were hundreds of splashing, terrified people, including children, struggling to stay afloat on the surface of the Chicago River. The situation was worse for women because they were tucked tightly into their long and heavy dresses, impossible to take off by the time they were weighted down.

Eight hundred and forty-four people died that day. It is reported that some bystanders did jump in the water to try save as many lives as they could. But others used the tragedy as an opportunity to take advantage of people by picking the pockets of a concerned and distracted crowd, and some opportunists even robbed the dead. The Sun-Times wrote that the captain delayed a rescue attempt because he was concerned about a boiler explosion. The police would later be accused of not attempting to help the people in the river, instead maintaining the crowd and holding back possible rescuers.

The public was morbidly curious to see as much of the tragedy as they could, and after the bodies were recovered from the vessel and water, a make-shift morgue was created at the scene so loved ones could identify the bodies. The spot was closed off for privacy, but a janitor of a nearby building charged peepers a dime for a look…at dead people…as families mourned.

When the names of the deceased were released, and this included 22 entire families, some of the homes were robbed.

This made me think back to when my oldest sister got married. I was nine and my parents arranged for someone to be at our house while we were gone.

“Why do we need someone to stay at the house when we’re not here?” my younger-self asked.

“Because people will see in the newspaper that we’re having a wedding and assume no one will be here, and then rob the house.”

I’d never heard of such a thing, and certainly I would never have considered something like that happening in the “good-old days,” because people in black and white photos were better than the people living in the eighties. They wouldn’t rob a family’s house during a wedding…let alone a funeral.

But they did, and despite knowing the dark truths about the past, I still catch myself romanticizing the “good-old days” whenever I look at black and white photos from a past generation because I want to believe there really was a time when people didn’t do bad things to one another. 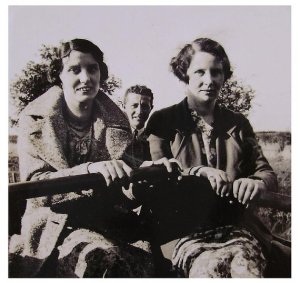 *The Chicago Sun-Times was my only source for this article. All of my facts, number of people dead, details of the tragedy, came from the article.

**Note:I do not own these pictures. I believe they are public domain, but if they happen to violate any copyright laws, I will take them down.