I’m currently working on a piece I wrote in college called The Hideout. I may keep the title, but most of the story will get tossed in the garbage soon, but it’s given me enough to work with, and though I’m sure I am barely a decent writer now, seventeen years ago, I sucked.

A horrible writer, but showed flashes of possibilities, ever so slightly, and today I’m trying to right my wrongs. It’s a big task, and only when my mind is saturated with enough alcohol do I believe I can succeed. It is late. I am drinking – writing – while watching a documentary on Kurt Cobain, and though I didn’t embrace Grunge when the music first hit the scene (because it knocked the #uck out of the long-haired, hard-rock bands I loved so dearly and I was bitter), it brings me back to my teenage years. I may not have connected instantly with the angry and depressing sound that was Grunge, I did love the fashion trend that came along with it. Flannels. Baggy jeans. Jesus sandals with socks. It was suddenly cool to dress like a lesbian…or the grumpy old man three doors down.

Plus, the ozone layer needed a break from all that Aqua Net. Goodbye high-hair!

And now, in the solitude of the late hour and the fog in my head, with Kurt’s tragic life playing in the background – I’m sure I can write this story – fix my mistakes as though they were never made because no one will ever know. No one needs to know how bad I was. The beauty of words written down that have never been read is that they are easy to erase.

All of my old stories, finished or not, have death in them. I hadn’t noticed this reoccurring theme in my writing while I was writing them so many years ago, but there it is. Every damn story has a character who dies.

I reread a piece that I had submitted to a publisher fifteen years ago when I was twenty-four years old. This was before submissions were sent electronically and everything was sent through the mail. The response time was slow, about six months. Writers spent a lot of time waiting. I had sent a query letter, a precis, and the first couple chapters of my story. Some time later, a woman from the publishing company called me, talked about the process, and requested the entire manuscript. I was heart-pounding ecstatic.

Shortly after I sent my complete story to her, I received a thin envelope regretfully informing me that my book was rejected. After a phone call and talk about book tours, I was denied a chance at my dream.

A few months ago I reread that story. The piece needed heavy edits, but I didn’t think it was too terrible, until I got to the end. The book was about two women who, after a lot of push, pull, and resistance, fall in love and then in the end one of them dies in a plane crash.

In my precis I didn’t divulge the ending, but I did set the tale up as a love story because that’s what I believed it was, and this was the last line of my lovely love-story:

“Loneliness never killed anyone, though sometimes she wished it would.”

That was my romance novel – my version of a love story. It was depressing as $hit and I was only twenty-two when I wrote it.

I don’t know how I became so jaded about love and life. Maybe it was all that Grunge music I learned to love so much.

Thanks a lot, Kurt.

Not all lesbians are fashionably challenged, but many are, and I’m no exception. We wear clothes as a necessary comfort, not to make a statement, except to say, “Yes, I threw on the first thing I saw in my closet without much consideration.” I wear clothes because it’s illegal to mosey around naked, and also because I don’t have the body that wears “naked” very well.

I can’t understand how anyone who knew me as a child (mom, siblings) were as surprised as they seemed to be when I came out. Since I was a little girl I hated wearing dresses. I have distinct memories of standing in the middle of my kitchen, begging my mother to let me wear my holey jeans.

“They have holes in them. And they’re dirty!” she’d scream.

Dirty, holey jeans were my preference of attire (and this was before they were trendy and stores didn’t sell pre-torn jeans). In the mid-eighties, ripped jeans were for burnouts with long hair, who smoked and listened to loud guitar-thrashing hard rock music.

I loved my holey jeans.

While I had no qualms with being messy, my brother (my twin) would change his outfit if one drop of anything – including innocuous water – touched a single thread of anything he wore. Pants, shirts, and shorts popped up all over the house. On the kitchen floor, across the stairwell, behind bathroom doors, or tucked between the couch cushions.

“Joey!” mom would scream. “Did you change your clothes again!”

Though she never admitted it, I’m positive having a daughter eager to wear the same worn clothes over and over was a welcomed relief to the scavenger hunt of missing trousers my brother had tirelessly put her through each day, but one thing is clear. There was a mix-up somewhere in the womb because my other half (literally) got the girl genes and to me, befell the genes that to this day make me recoil at the sight of department store make-up counters, and to the perky saleswomen with their overly painted-on faces standing under those bright, shiny lights.

Thank Christ grunge was all the rage when I was a teenager. Flannel shirts, baggy jeans, sandals with socks – it was fashionable in 1993 to dress like a lesbian – and I loved every second of it.

I was twenty-years old when I crept into my first Gay and Lesbian support group where I met my friend Tony. My fashion disaster ways were still prevalent and every lesbian needs a fashionably sensitive gay man in her life to tell her it’s time to tweeze those eyebrows.

“Eyebrows are supposed to have an arch, Alicia,” he’d say. “And there’s supposed to be two of ’em.”

But it did’t stop there. He also gently persuaded me to dump my white leather fringe jacket and ditch the blue eyeliner and bright-red blush.

Farewell rosy cheeks, it was time for a more subdued look because the year was 1996, not ’86.

Eighteen years later, Tony is still my fashion confidant, but he’s also a dear friend – a friend who listens without judgement and has the uncanny way of knowing exactly what I need to hear during my most vulnerable moments. A friend who constantly reminded me I was a writer, even when I didn’t feel like one. His support helped me to never give up on my dream. When my first book was published, he was as happy for me as if his own dream had come true.

He helped me pass bookmarks out in a predominately lesbian neighborhood to promote my book. Over lunch he gushed about how talented a writer I am and then told me to burn the jeans I was wearing as soon as I get home.

Honest friends aren’t always good for your ego, but thank God for them because I shudder to think what I’d look like if Tony wasn’t in my life. 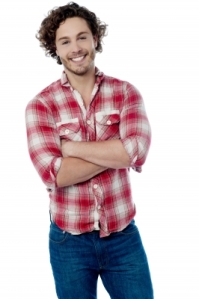